APV Films  are the foremost producers of instructional art films in the UK, with many years experience working on productions for release on DVD, video and broadcast television, films for the Royal Academy of Art and the Arts Council of Great Britain.

The DVDs  and downloads are available from APV Films: www.apvfilms.com/show_artist.asp?id=35.

Breaking news: A new DVD will be released later this year or early next year. The ‘film’ was made in England in August 2019. 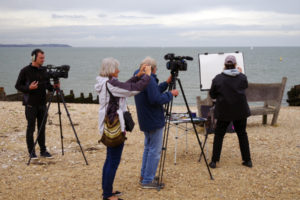