“You can create mood, magic, atmosphere, time, light, all by tone”

Following on from her previous title ‘Five Steps to Watercolour’ where Amanda demonstrates the effectiveness of using her five steps to create successful watercolours, in this film she places more emphasis on tone. Choosing subject matter in the south east of England, Amanda demonstrates the impact of using tone on rural and coastal subjects including the harbour at Ramsgate, a stormy view of the Reculver Towers and a scene with figures in Whitstable. 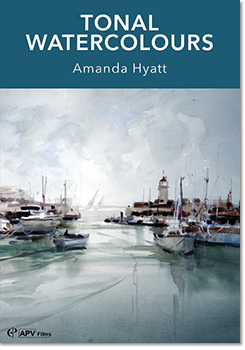