Amanda Hyatt is an artist, writer and educator. She was born and educated in Melbourne and has a BSc (Hons) in chemistry. Amanda has painted all her life, selling her first painting at the age of ten. While studying science she concurrently attended fine art courses at RMIT. Deciding against following a career in science she returned to fine arts as a professional artist.

Amanda has been a professional watercolour artist for 36 years. She has had over 36 solo exhibitions, with international exhibitions in New York and China and is renowned internationally as a ‘Master of Watercolour’ and one of seven international “Masters of En Plein Air Watercolour Painting”. She has won many prizes including the Camberwell Rotary Art Show Gold Medal as judged by Sir William Dargie (1992) plus other major Australian awards including the prestigious Alice Bale, Kenneth Jack and “Artist of the Year Award” at the Victorian Artists Society. She has conducted numerous painting demonstrations in Australia and internationally. She has been a member of both the Twenty Melbourne Painters Society, the Australian Watercolour Institute for 28 years and the Victorian Artists Society for 34 years.

Amanda’s internationally unique painting style and interpretation of subjects is described in DVDs, publications and website. Amanda has numerous teaching DVDs including those by ‘APV Films’, a best-selling book “Watercolour: Tonal Impressionism” and has written over 50 articles for leading art magazines such as The Artist (UK), L’Art de L’Aquarelle and Pratique des Arts (France), Flashart (USA), International Artist and Australian Artist. Amanda is in high demand for both national and international workshops and now spends most time teaching overseas (England, USA and Europe).

Amanda with a pen and wash (en plein air) 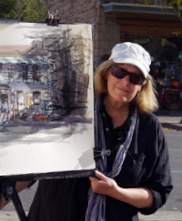